Matthew McConaughey had a very McConaughey reaction to seeing his now wife, Camila Alves McConaughey, for the first time in a club some years ago.

The actor recalled their intense first encounter and “great connection” during an interview with Oprah Winfrey for Apple TV+’s “The Oprah Conversation” about his new memoir, “Greenlights.”

“I remember the first words out of my mouth ― which is in the book ― I didn’t say, ‘Who is that?’ I said, ‘What is that?’” McConaughey said of seeing his wife in an exclusive clip shared with People magazine on Tuesday.

“It moved ― she moved across the room and then I went into dispatch,” he said. “We had a great connection. I spoke better Spanish and Portuguese that night than I have since, you know what I mean?” 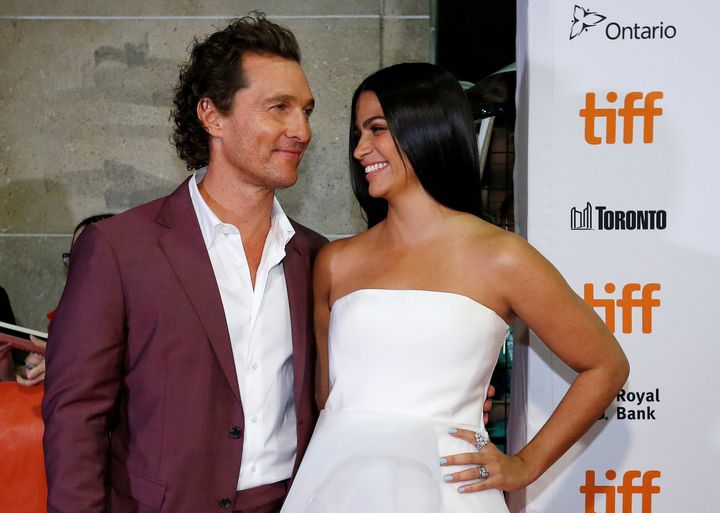 McConaughey and Alves arrive for the world premiere of “White Boy Rick” at the Toronto International Film Festival on Sept. 7, 2018.

In his new book, the Oscar winner writes, “Were her feet even touching the ground? I couldn’t be sure … she was defying gravity.”

The “True Detective” star recently recalled the same story for People magazine, adding that he wasn’t ever sure if he would meet someone who was right for him.

“I was like, ‘Wait, just wait. Be yourself. She’ll come if she’s supposed to come. And if she doesn’t, that’s okay, you’re still a good man, McConaughey,’” he revealed.

But once he saw Camila, it was game over.

Camila recently posted a sweet throwback photo and message to McConaughey on their anniversary in June.

“As a young adult I never thought of marriage, I always told my parents don’t ever expect me to get married!!” she wrote. “Well … you fully changed my perspectives and the meaning of it.’”

Cate Blanchett knows what it’s like a have a full house. The actor and her husband, Andrew Upton, are parents to three sons ― Dashiell, Roman and Ignatius ― as well as a daughter, Edith, […]

Antonio Banderas is marking his 60th birthday in quarantine, telling fans he’s tested positive for COVID-19.  The Spanish actor, who has starred in “The Mask of Zorro” and “Evita,” opened up about his diagnosis on both Twitter […]

Meghan Markle On Ruth Bader Ginsburg’s Death: ‘Honor Her, Remember her, Act for Her’

“With an incomparable and indelible legacy, Ruth Bader Ginsburg will forever be known as a woman of brilliance, a Justice of courage, and a human of deep conviction,” the Duchess of Sussex said in a […]